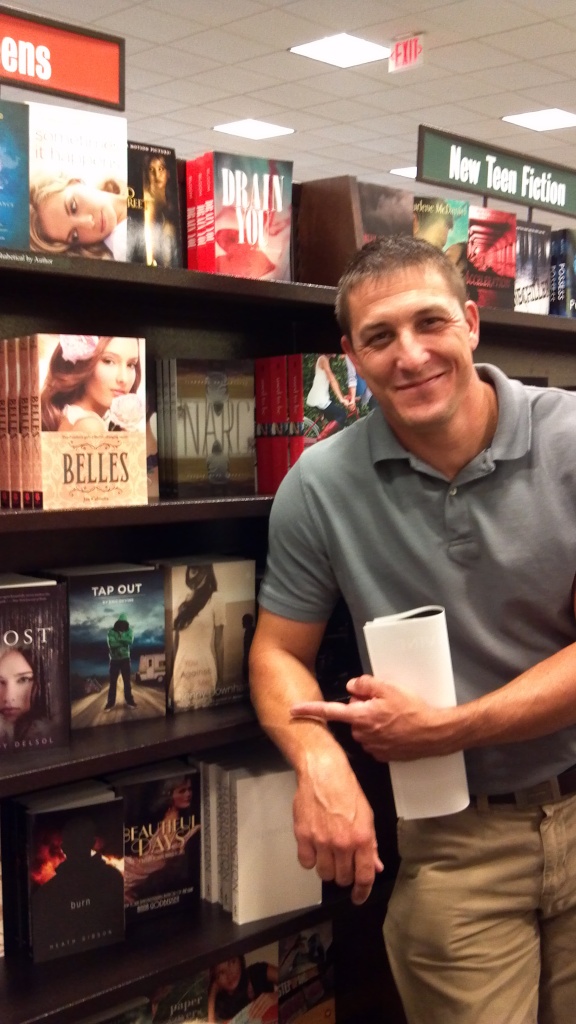 This picture was taken on Tap Out‘s Book Birthday, 9/11. It is far and away, the most viewed picture of me, ever. Facebook tells me so. There’s more to this picture, though, than just me mugging with my novel, grinning ear-to-ear. You see, most days I’m not smiling like this. I’m downright serious. It has nothing to do with being surly (although some might argue otherwise, and win). It has to do with the agreement I entered when I decided to be a writer. It’s a similar pact for anyone who’s pursuing something with no guarantees, say opening a business or working toward a degree or trying to successfully raise a child. We all agree to the following:

Therefore, the time spent in pursuit may not be filled with a pictorial catalog of grins and laughter. More likely there will be an earnestness, a borderline hostility. This is not an excuse. I do not feel it’s all right to be a jerk just because you’re out to prove something. Nor is this a stereotype. I can guarantee that there are writers and doctoral candidates and mothers to quintuplets who smile all the live-long day. I just have never met one. I think they may be as rare as unicorns.

However, when the goal is achieved, be prepared for a bit of mania. I haven’t yet touched down from the high I’ve felt since Tap Out was released. There have been wonderful reviews and an outpouring of support from my colleagues and family and friends. Bookstores are selling out of Tap Out and having to restock because of the high demand. Seriously? I did this? I wrote a book that well?

It’s hard to imagine when you’re in it that you’ll ever reach this point. But for all of you at whatever stage, think of that grin. Imagine that’s you next to your novel or at your office door or watching your child off to school. The agreement is the way it is because it forces the best out of us.

That picture up there proves it.

7 thoughts on “The Agreement”