I live an all or nothing kind of life. I’m either working on a novel, or I’m recovering from having just written a novel. Or am dying under the edits of yet another novel. The same is true for how I have spent my summer.

I wrote only in June and July. I have taken August completely off. That’s because owning my new home has consumed me. And now that I’m feeling the cool stirrings of fall in the air, I understand that my approach to life nets results, but certainly comes at a price.

Even if I had wanted to write more than just entries in my journal this past week, I wouldn’t have been able to. My right hand kept going numb. Pins and needles, completely useless kind of numb. That’s because I spent up to 6 hours a day using an ax and a mattock to pull the root system out of the hill on my property.

The work was grueling, and painstakingly slow, but the result is a piece of land that with only a little more work (chainsaw those big stumps) will be an unbelievable place for sleigh riding in the winter and should produce beautiful wild flowers in the spring. 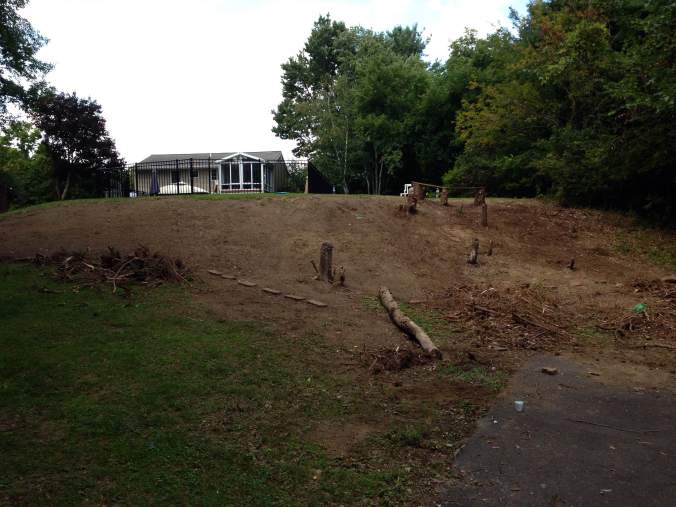 Note the hand pulled roots below

But it’s more than just that I wanted a little more yard and a way to escape writing for a month.  It’s that I wanted to give it my all. I wanted to move into my new home and make it just that. My wife has better design sense than I ever will, so she set to work on the interior. Which left me the option of being lazy or being productive for August. Being lazy doesn’t really work for me.

Yet, last night, when I sat down after having spent most of the day picking up from our incredibly successful house warming party on Saturday, I realized my feet weren’t just sore, they were puffy. Really puffy. With a night’s sleep they’ve gotten better, but I’m taking the arm and foot fatigue as a sign that’s it’s time for me to stop being consumed by my home, and to enjoy these last days of summer.

My dogs enjoying the party 🙂

Which is smart, but which also means that soon I will be consumed by teaching and writing. At least those jobs do not need an ax and a mattock. Well, literally speaking 😉

But they do come with their own challenges, and their own consuming demands. As will my home with a change in season. But it’s worth it. All of it.

So as the real New Year begins for so many of us and our children, good luck with your own consuming lives. They’re worth every ounce of energy you can give them.

The Fourth means chilling with my dogs in the sunroom. They are not a fan of fireworks 🥺 I hope you are all enjoying, fireworks or not.