Pre-surgery. The meds have kicked in at this point.

Over the past five days I have had the pleasure of assisting my wife, Carrie, through gastrointestinal surgery. I say that without sarcasm. The frailty of the human being is always astonishing, yet so is the resilience.  And in the twenty-one years I’ve known my wife, rare is it that she has shown frailty. Resilience, on the other hand, she has in spades.

Therefore, from last Wednesday through yesterday, I lived at Saint Peter’s hospital. I spent early morning hours at Carrie’s side, as pre-surgery anxiety overwhelmed her. After, I spent full days and evenings and well into the night, tending to her by adjusting the bed, fixing pillows, making certain the nurses were keeping watch, advocating for all aspects of her care, and making sure she was discharged in as timely a manner as possible.

Post-surgery. The meds have most certainly kicked in.

Most evenings I would pick up my daughters, or they would be brought to me, from my parents or in-laws, who were an absolute blessing through all of this, and it took all I had not to collapse. That was not a possibility; not when their mother was being so strong at the hospital miles away, and because of flu concerns, they could not see her.

Often, Carrie thanked me for helping. I could barely stand it. There was no need. It was my absolute pleasure to help, to sit, to fetch, to do whatever was necessary. That’s what love is. It’s not only the romance of flowers and jewelry and amazing dates. It’s the sacrifice that doesn’t feel like such. It’s the compassion and concern for someone else, far beyond your own concerns. It’s the actions my wife displays day in and day out. It was only appropriate that I return the favor. 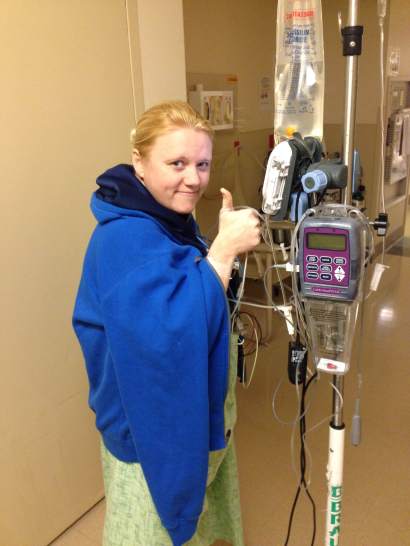 On the move to get out the door.

She’s home now, and recovery will take far longer than the days in the hospital. Fortunately, that’s perfectly fine. She’s healthy and will heal. She’s better for the sacrifice, as am I. We both look forward to spring and positive change. It’s taken a bit to get here, but it’s a better place than where we have been.

5 thoughts on “Hospitals and Sacrifice”