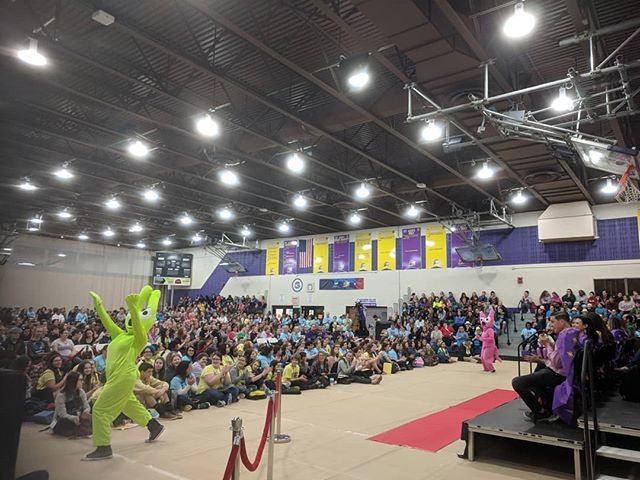 The hype crew, getting the 2,500 in attendance ready.

Last year I posted about the Rochester Teen Book Fest and my awesome time attending with Albany High’s Book Club. In that post I said that I’d be back, and I meant it, and it happened, but this time with me as  part of the author lineup.

I joined 25 other authors and 5 teen authors for the festival above all other festivals. That’s not hyperbole. To walk into the gymnasium at Nazareth College (bedecked in a cape no less), following a drum line, and take a seat in front of thousands of teens and librarians and teachers was a bit breath-taking. But volume isn’t everything. I’ve attended similarly sized events, and they did not match the intensity and fervor with which the audience reacted to the authors on stage. Some say that reading is dead or dying, but if the pulse at Nazareth is any indication, that couldn’t be further from the truth.

Presenting this year, instead of attending, was a blast. However, I would have thoroughly enjoyed listening to any number of the other authors (you checked the link above, right?) My team–I got a team–was on point and took care of everything, including enforcing the teen-first policy that makes Teen Book Fest so special (I’m looking at you Nick). 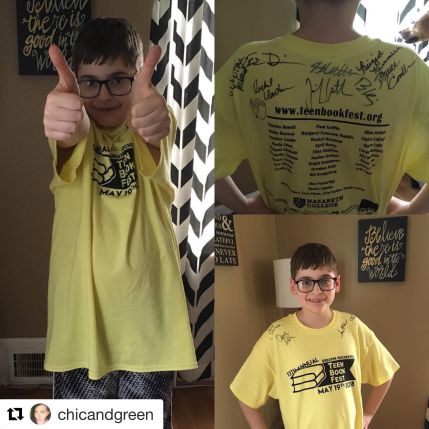 I extend a huge thanks to the teens who attended my sessions and let me ramble on about the fears I hold in life and in writing, which are many, and spout off about the various dumb choices I made as a teenager and how they’ve shaped my writing today. Someday I will write a story that includes those goldfish. They deserve a proper sendoff.  And to all who then bought my work, thanks for buying ALL the copies. It happened so fast, I truly don’t understand how. But no complaints, here. I’m just glad my work has found its way into so many new hands.

Hanging with the authors and librarians this year was phenomenal fun. When I get to have dinner with the likes of Brendan Kiely, Bill Konigsberg, John McGoran, Alisa Kwitney, and Taran Matharu, as well as have lunch and great conversation with Gloria Chao, only to then have drinks with Ellen Hopkins and Cyndy Etler, what more could I want? Well, more librarian time. My rowdy table of fantastic librarians, who were ready to party after executing one hell of a day, after one hell of a difficult year, was truly the icing on the cake. To spend time with these individuals, who have volunteered so much time–so much time–to make this incredible, teen-focused event a reality was wonderful to be a part of. Yes, our singing was terrible, and I couldn’t tell a cow from a pig, but the vibe that existed was a carry over from the vibe from the morning. There’s a reason Teen Book Fest is spectacular, and it’s not the authors, it’s the people who work behind the scenes to connect us with the teens. That’s my takeaway from this year, and something I’m proud to have experienced. 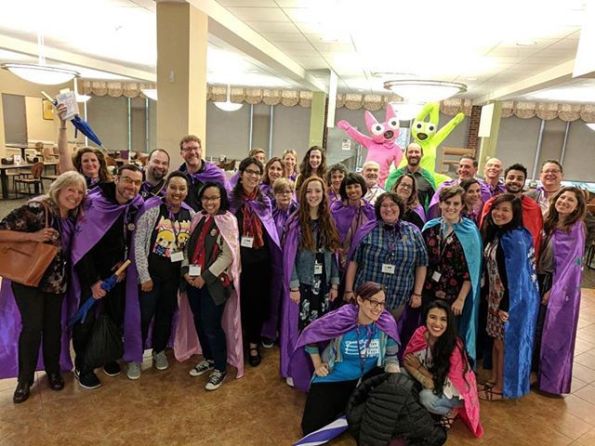 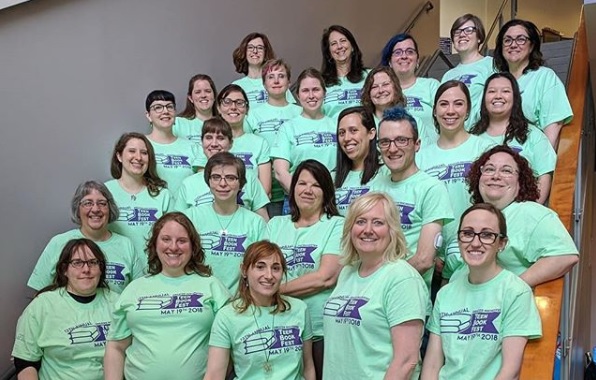 Even more awesome, librarians and organizers that make up the TBF committee.

And so here’s hoping I’ll be invited back next year, so I can jump off more tables, do more cartwheels and hand springs, sign more shirts, tell more stories, and to again ask one question of the teens, who came up to the signing table, full of excitement and exhaustion: “Did you have fun today?”

And to hear the inevitable response, “It was the best!”